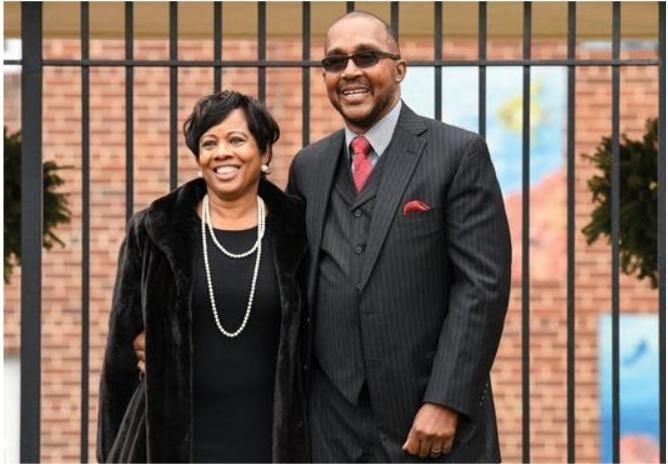 Terry Carnes, PE, the Owner of Consulting Engineers, Contractors and Architects, LLC (CECA, LLC)— a minority-owned, full-service architectural and engineering firm specializing in third-party inspections in Lanham, Maryland. But there’s more. Terry is more than a PE. He’s a veritable cornerstone of the Maryland engineering industry.

How? Let’s start with his professional certifications; he is a Professional Engineer licensed in Maryland, the District of Columbia and Virginia. And just for good measure, he also earned his certification as a commercial and residential electrical inspector. A graduate of Howard University, he has been the director of maintenance and engineering at Providence Hospital, D.C. General Hospital, and the MedStar Washington Hospital Center. Oh, and he’s also been the facilities manager at FedExField.

And what does he do with his time off? He’s on the board of directors for the Children’s Guild Institute, a nonprofit child-serving organization helping children and adolescents who are difficult to educate due to autism, multiple disabilities and/or trauma. “Engineering is my calling,” he says, in a quiet, measured tone. “It’s what I love.”

The first thing you notice about CECA’s employees is how measured and thoughtful they are. There is no superfluous conversation or exaggeration; instead, the tenor of the conversation is calm, cool and collected. “It starts at the top,” says Cynthia McFarlane, CECA’s Architecture and Engineering Manager and second longest-serving employee. “Terry is a calming presence.”

A calm countenance is valuable in a company as diverse as CECA. The firm provides engineering, third-party inspections and MEP commissioning throughout Maryland, Virginia and the Washington, D.C. area. “It’s an important job and we take it seriously,” says Thomas Almore, CECA’s Project Coordinator.

Terry was born in Wilmington, Delaware, to LT Carnes and Willa Dean Carnes. The entire family had a “spirit of entrepreneurship,” as Terry explains. “My father only had a third-grade education, but he owned a landscape business in addition to being a full-time ironworker. My mother began her career as a schoolteacher who later became a seamstress and had a tailoring business from home. And my older sister, Delores, opened a shop selling handmade kimonos and handbags.”

Terry attended Howard University, where he earned his Bachelor of Science degree in electrical engineering in 1974. While attending Howard, he applied for and was hired as an intern for a consulting engineer.

His first project involved Washington D.C’s Metropolitan Area Transit Authority transit system. “I was tasked with helping oversee the contractors and making sure the designs were being implemented according to WMATA design criteria,” he explains. “It was a great experience because I learned how to speak to engineers and contractors and how to work out problems in real-time. You don’t learn that in school.” After graduation, he started working with the consultant as an employee, but he knew that there were other opportunities ahead. “At the time, agencies were recruiting minority consultants,” Terry explains. “But, there were only a few and not all were competent.” Seeing this reality gave him an idea: He would become a consultant himself.

Terry knew he needed more experience before he could go out on his own. “I left my job and worked for a full-service AEC (architecture, engineering and construction) firm for two years,” he says. Working in a large organization taught him how to manage clients, contractors and budgets and to think outside the box. “This was a high-pressure, high-intensity job,” he says. “I was with them for two years and then a smaller MEP (mechanical, electrical and plumbing) design firm until I got my PE in 1982.”

It would be easy to assume that Terry launched his company immediately after leaving the firm, but that would be incorrect. Instead, he worked to set himself up for his future. “I thought that to be a successful consultant I would need relationships in local government,” Terry recalls. He applied and got a job at D.C. General Hospital as the facilities engineer to begin to establish a network.

“It turns out I had a knack for it,” Terry says. “I genuinely loved the work and went on to become the director of facilities at Providence Hospital, and later at MedStar Washington Hospital Center.”

Still, the entrepreneurial spirit called him. “One of the reasons I took the facilities engineer job was that I could moonlight as a designer,” he explains. So, in June 1994, he opened Carnes Engineering Consulting and Associates, or CECA.

“Early on I was introduced to third-party inspections. One of my earliest jobs was working on the construction of FedExField,” he says. He made quite an impression with the project owners, who offered him a job as the stadium’s facility manager. “It was an entertaining job. Game day was always interesting.”

He spent almost two years at the stadium before going out on his own once again.

While Terry enjoyed his time working for the Washington football team, the spirit called him again to follow his family’s passion for entrepreneurial endeavors.

“It was time for me to get back to CECA,” he explains. Terry’s first substantial change was to change the company’s name to Consulting Engineers, Contractors and Architects. “I didn’t want so much focus on myself,” he says. “I didn’t want to be the brand. And, I always envisioned having an ESOP (Employee Stock Ownership Plan) company. I wanted employees to participate in ownership for the future of the company.”

Terry and his early team started getting work with the ecumenical community. One of CECA’s earliest projects was the $18 million Reid Temple AME Church in Glenn Dale, Maryland. “It’s a 134,000-square-foot, 3,000 seat church,” Terry explains. “We were responsible for the A/E design. This included the sanctuary, over 5,000 square feet of office space, over 7,000 square feet of meeting room space, 16 classrooms, full audio/video capabilities, two nurseries, a bookstore and a credit union.”

This project was immediately followed by the Temple of Praise Baptist Church. “We were responsible for A/E design,” says Terry. “This 28,400-square-foot church consists of a 1,300-seat sanctuary, over 1,500 square feet of office space, over 2,000 square feet of meeting room space, a fellowship hall, full audio/video capabilities and a bookstore.”

Amid the company’s growth, Terry could tell the tides were changing.

“I recognized that third-party inspectors and inspection services could be a major growth area,” he explains. “Local municipalities were having trouble keeping up with the construction boom as the greater D.C. metropolitan area was, and continues to go through rapid growth.”

Today, Terry contends that CECA is considered to be one of the “premier independent third-party inspection agencies in the D.C. metropolitan area.”

“We are certified to perform third- party inspections in the District of Columbia, Prince George’s County, Montgomery County and Northern Virginia,” Terry says. “Our inspectors use their experiences and knowledge of design and construction processes to ensure compliance with the requirements of the building codes as well as approved construction documents. Our inspectors are International Code Council (ICC) certified and include master electricians and professional engineers.”

One of the firm’s largest inspections was the $2 billion National Harbor. Located along the Potomac River near the Woodrow Wilson Bridge just south of Washington in Oxon Hill, Maryland, the project has over 7 million feet of mixed-use development across 300 acres. “We were responsible for all mechanical, electrical, fire and architectural general building inspections. The services were essential to secure the Use and Occupancy permit for the buildings for each building on schedule,” explains Terry. “This was a difficult task because the development included four hotels, three office buildings, three residential buildings, five restaurants and four parking garages housing 4,500 parking spaces, all under construction simultaneously by various general contractors on one site.”

He continues, “We are fortunate to have repeat developer clients such as Paradigm Developers, EYA, Peterson Companies, Varsity Investment Group and Velocity Companies.”

Third-party inspectors are even more important when things go wrong, as evidenced by a recent event at a major development project in Prince George’s County. “Unfortunately, there was an incident, which the county said stemmed from improper electrical work,” Terry explains. “Of course, this led to a conflict between the development’s owners and the county, and unfortunately, they couldn’t come to a resolution.”

He continues, “The county and the owners agreed to hire an independent inspector to review the issues. They then called us and asked me specifically to review the situation. They agreed that they would follow whatever conclusion I reached, and after a successful resolution, CECA was hired to provide verification of the facilities’ electrical code and compliance.”

While the project is still ongoing, “it speaks volumes about CECA,” says Cythnia. “I think we’ve developed a reputation where contractors and clients listen to us and trust our answers.”

Terry continues. “We want to be fair. We want to build trust on all sides. We do that by being honest, and we aren’t afraid to say that we don’t know, but we will find the answer. We’ve found that everyone appreciates that.”